Is it complaining if I complain about those who are complaining about AD/DC’s choice of a guest singer for their forthcoming 11 live shows? Is it hypocritical to do that? Or is it barely pointing out the double-standards?

Axl Rose is no stranger to getting attention and more often than not, it’s the attention from the negative part of the spectra. But even by his standards last few months have been a regular negativity overload. That and all those endless piles of negativity Axl has been targeted with over the years (well decades), leads me to conclusion that he has some extremely huge and sturdy balls.

But let’s start from the end…

Couple of days ago AC/DC announced that Axl Rose of Guns N’ Roses will replace their singer of 36 years who was forced to step off the stage momentarily due to severe hearing damage, which has left him on verge of getting def. The news was announced few hours prior to the Guns N’ Roses concert at Coachella Festival. It was only their fourth concert since announcing their (partal) reunion. And then towards the end of the show AC/DC main-man Angus Young joined the band on the stage for cover versions of AC/DC’s “Whole Lotta Rosie” and “Riff Raff”. What a way to announce the news, ey?

I think that AC/DC should have called it quits and cancelled those remaining 11 shows. God knows they don’t lack money. Now, I’m of the opinion that Axl Rose is a astonishing singer, performer and musician in general. Few can argue with that. We all know he can hit those notes, but he’s just entirely different persona than Brian Johnson or Bon Scott for that matter. So that’s my opinion and it pretty much ends there. Thousands of others however feel the need to start revolting against the decision their own favourite band took. They call it disgrace and once again jump on that “let’s shit on anything that has to do with Axl” wagon.

They are calling the band and its legacy dead, they “threaten” to sell their tickets and I’ve noticed one particular dimwit stating that the 46.000 seat sold out show at Stadium in Danish city of Aarhus will probably end up being moved to the local venue Voxhall with capacity of 700 people.

I understand that people find Brian Johnson (who replaced the “irreplaceable” Bon Scott in AC/DC back in 1980) to be irreplaceable. I actually agree on that, but the fact that grown men and women are voicing the views that are mixture of gore and childish is just …beyond my comprehension. If they are such true fans of the band, then can’t they at least have enough courtesy to respect the decision that their idols (mind you) made? It’s Angus Young’s decision. Does the fact that you’ve been following the band for some years or decades mean that you need to be violently graphic about the fact that you don’t agree with the decision the band made? Perhaps the fact that you’ve been following them for such a long time should actually make you show some respect for the band that has given so much good to your life?

As for the fact that Axl Rose accepted the offer, how can you blame the guy? If nothing it shows courage, but think about it like this … if you were so amazing on so many levels that your favourite band offered you a gig and piles of money, would you turn down that offer? Think about it? Would you have balls to say YES? Would you have balls to say NO? I mean how do you follow this? On top of that, how do you follow this sitting down because of the injury?

And as for the tickets you’ve purchased for the gig, don’t even worry about it – if the organizer doesn’t give you money back (which they will), you will for sure be able to sell them to someone who wasn’t lucky enough to get hold of the tickets in the first place. And judging from the overall moral grounds, you’ll even make some money on them. 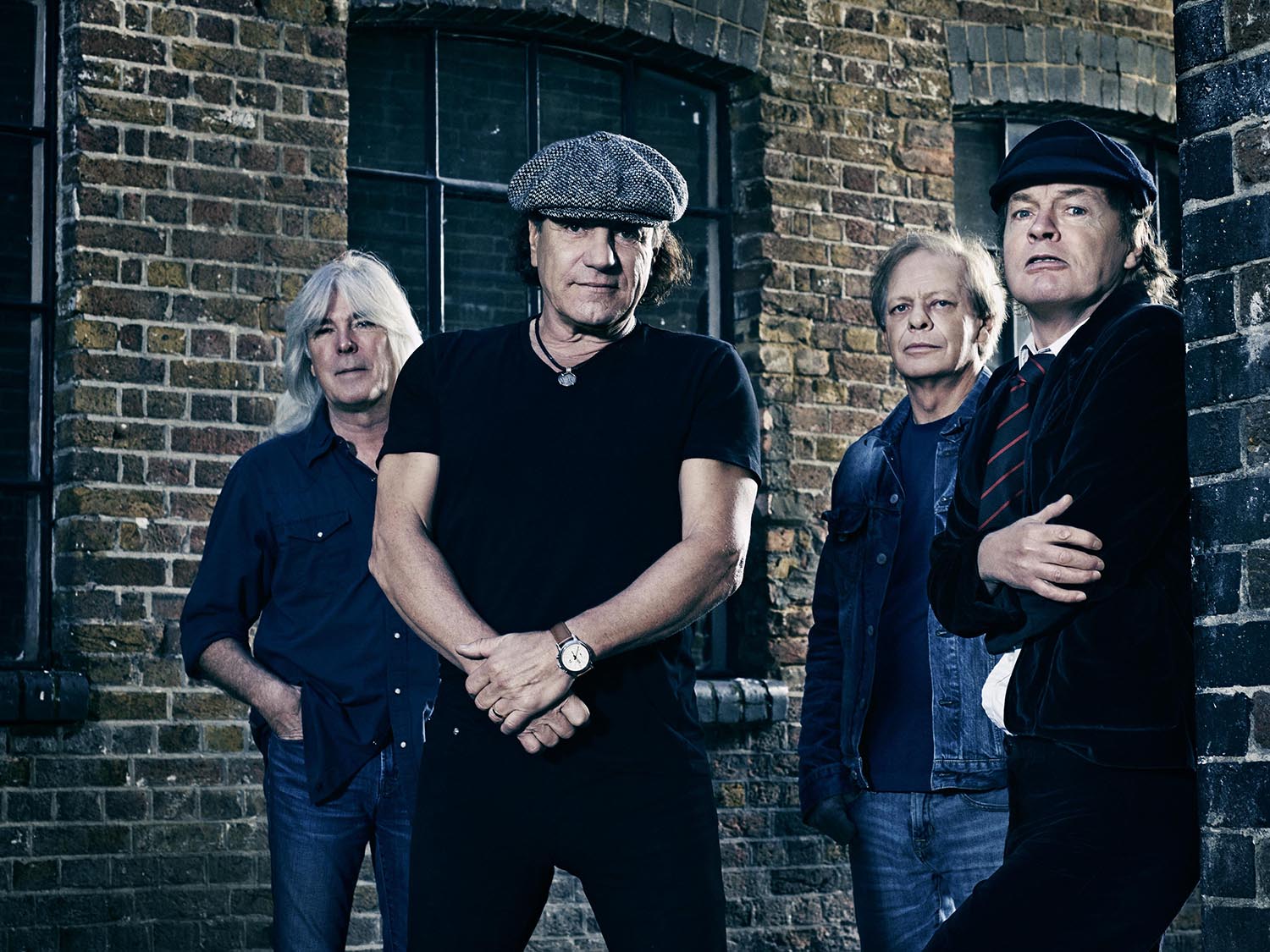 What makes Axl’s decision to fill in for Brian Johnson even more daring is the fact that he just displayed enormous amount of valour when he got injured during the surprise Guns N’ Roses gig at Troubadour, he decided to go on and start the already sold out tour. The open surgery didn’t keep him down and not only that, the fact that the expectation for this reunion were so huge, that the fact that he was supposed to do these gigs sitting down, was defiantly not good for fulfilling the expectations and shutting up the cynics. He decided to go on with tour as planned playing those first shows together with some of the original members after 23 years. That takes courage and devotion, none the less because of many sceptics who shot the entire thing down before it even started, partly due to the fact that the reunion in this case meant that the original members, drummer Steven Adler and guitarist Izzy Stradlin were not part of the of the reunion. Not even their replacements from Use You Illusion days were part of it, but rather some other “new guys”.

Now the fact is that the “new-guys” (Frank Ferrer and Richard Fortus) have been in the band longer than Izzy, Steven, Matt Sorum or Gilby Clarke have combined. But I know that’s not how you measure importance or nostalgic value, but that is the fact.

Personally I think that this reunion would have gotten bigger impact and bigger genuine-factor, have Izzy and Steven been part of it. Steven was one of the first ones to talk about wanting to get back together with the band, but at the same time he was the one who was at certain points talking most shit about some of his former bandmates as well. Truth is that he might not be the best drummer out there, but he was not only original member of the band, but as Izzy put it “his sense of swing was the push and pull that give the songs their feel”.
As for Izzy he wrote most of the finest GN’R songs and his feel when it comes to playing was never really entirely filled after he left the band. But as it looks Izzy simply didn’t want to be part of this reunion. I mean, he’s the guy who walked off from GN’R when they were at the top of their career, because it didn’t feel right anymore. Steven on the other hand wanted to be part of the reunion, but his troubles with drugs, arrests, health and other issues, didn’t make him a stabile or reliable choice for reunion of this scale. Gilby was never more then hired gun and Matt was probably vetoed by Axl because of his many public outbursts aimed at Axl. So what we have here is (partial) reunion of Guns N’ Roses and it’s the biggest thing around.

And while I believe that Axl did have to drop some of his requirements for this reunion it’s clear that he managed to get this together, to get number of his people in the new line-up and he even got Slash and Duff to play some of the songs from Chinese Democracy, the album that they had nothing to do with and an album that in itself is the ode to the Axl’s vision and the size of his balls. 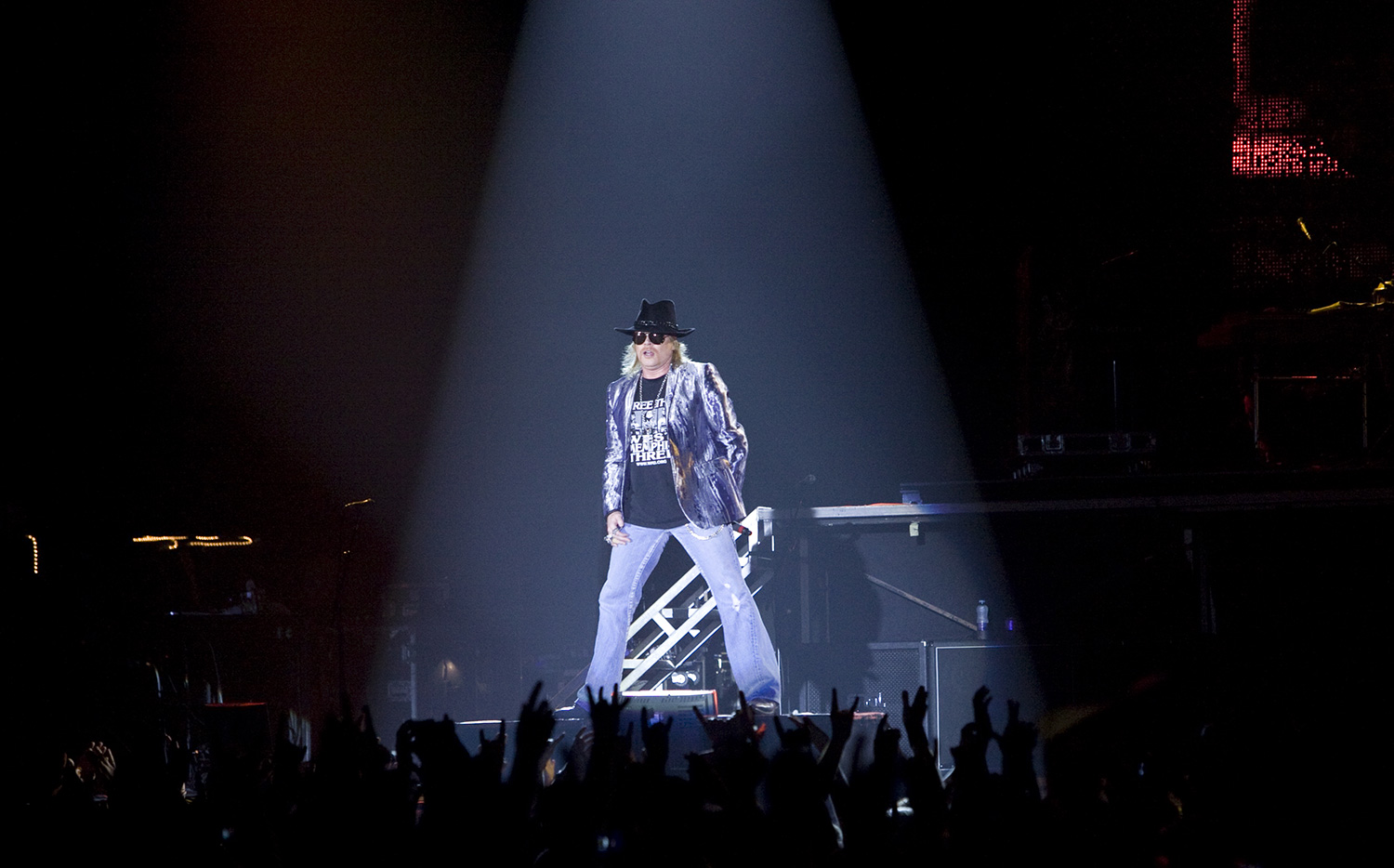 Chinese Democracy came out 17 years after GN’R’s previous release Use You Illusion, but the truly astonishing thing about it is that it was in making for about 10 years. That fact alone shows the perseverance and nerve Axl displayed throughout the process.
How in the world did he get record company to wait for so long while at the same time getting them to pump more money into the project is just beyond me. He even got them to release it without the recognisable logo and with what can only be described as not at all rock looking artwork. It takes guts and balls to do all that, while at the same time creating a masterpiece, that Chinese Democracy is. The funny thing is that despite an enormous amount of negativity about the album (even before it came out), Axl still put it out and gained positive reactions from all the former band members, who at the time basically hated one another.

Chinese Democracy might not feel like GN’R, but it’s an astonishing album. In the end, that’s the most important thing.
Once the album was out after millions of dollars of investment in it Axl managed not to give any interviews or make a single music video for it. He basically managed not to do any promotion for it. How in the world do you manage to get away with that in the world of business is beyond me, but goddamn that has to be more rock ‘n’ roll then trashing the hotel room or drinking yourself to an early death.

Axl Rose might at times appear as a dictator, but it’s without doubt that he’s a genius who’s willing to truly bleed for his art. And we all know that the line between insanity and genius is very thin … if it’s even there. Axl Rose is one of the rare people who have achieved major commercial success ant yet he truly does projects passion, dedication and massive balls. He’s the real deal, even if we might not understand his (at times) eccentric behaviour. But just ask yourself; how many masterminds out there were not extremely eccentric? Close to none.

The focus of mainstream might be on the peculiar, which then gets presented as negative, but no one can deny the talent and God given gift of this man. And on top of it all, no matter how much you disagree with his choices you just can’t deny that his career and those very choices are the a proof of the one-of-a-kind-balls this guy has. And such men – i salute … with a smile on my face. 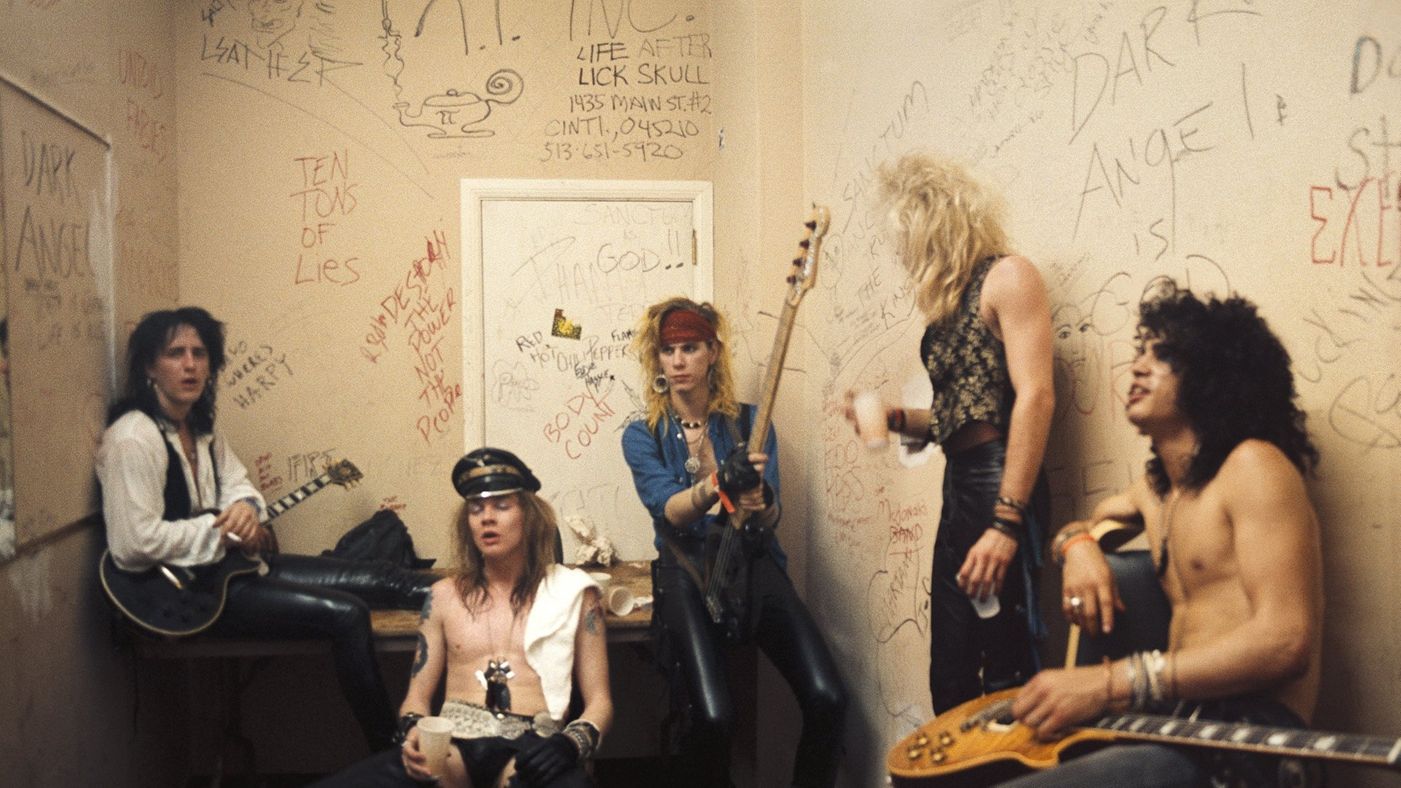