The finals of Euro Cup 2016 have reviled several different losers and they as such had nothing to do with the final result of one of the biggest football games of the year. Losers are often not carecterized by the result, but by something much bigger. And the losers of Euro Cup 2016 finals are…

When one of world’s best players is not in your team, the desperation and fear that you feel often comes to surface in form of childish and malice treatment of that very player. You discard any basic morals, self-reflection and just plain and simple basic code of conduct. And let’s not forget you discard any respect for the fact that someone has mastered the game you “love” to such a degree that they are one of the best in for world at it.

This resulted and the overwhelming booing of Portugal’s star Ronaldo any time he received the ball or any time the camera was on him.

The pathetic nature of this behaviour from the big part of French fans is still nothing in comparison with the fact that the above-mentioned behaviour only intensified once Ronaldo was injured and forced to leave the match.

This behaviour has no place in football and especially within the UEFA framework whose big part of communication and million-euro campaigns concentrate on RESPECT!

To make matters worse Ronaldo’s exit was caused, by a headless tackling of French player Dimitri Payet in the middle of the field during a completely non-treating action by the Portuguese star. Referee Mark Clattenburg not only didn’t give Payet the yellow card, but he even failed to stop the game and give Portugal a free kick.

The audience’s booing and ridicule escalated as Ronaldo was forced to leave the match with tears in his eyes.

An audinece hailing from the country of gentlemen, cultural epicentre should know better, nonetheless after the horrific terror attacks in their country. They should know the importance om compassion and respect. 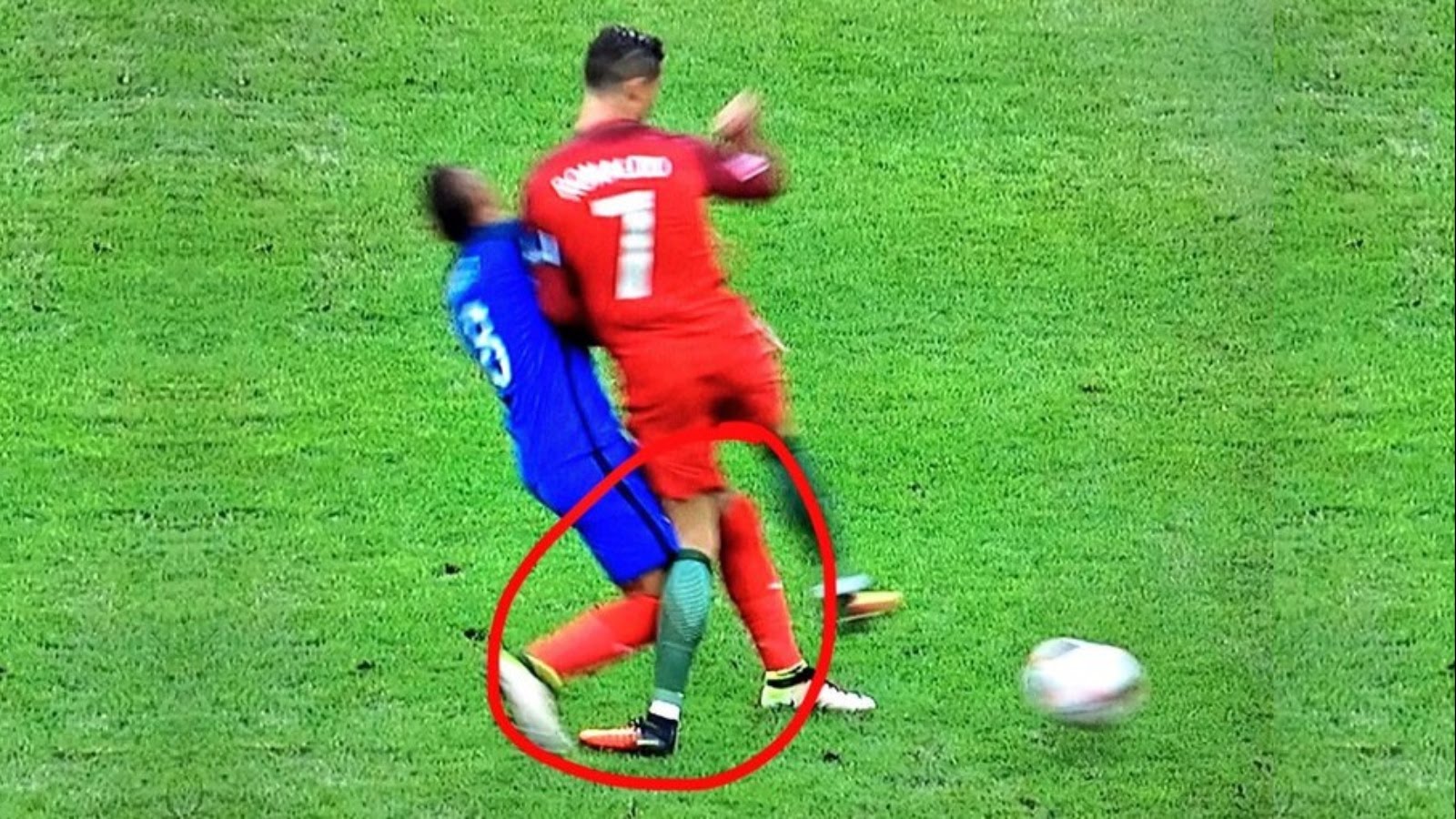 Dimitri Payet might not have tacked Ronaldo with intention od injuring him so severely that he has to exit the finals, but it was clear that he was set to give Ronaldo a message, that he’ll be tackled hard and that that’s the French national team’s strategy for stopping him. This is clear looking at the tackle as well as when and where on the field it occurred.

The heedlessness of his tackling might not have been be planed, but that doesn’t change the fact that it did occur and that resulted in no consequences for French team, while one of world’s best players was forced to exit the finals after only 25 minutes and after two failed attempts to get back in the game.

After the game Payet made the whole episode even more sad and pathetic by telling reporters:

“No, it was a challenge, that’s all, period. I regained the possession and if I hurt him it was not intentional. It’s not in my nature to be a bad guy on the pitch. There is no question about it”.

…and IF I hurt him it was not intentional.

Referee Mark Clattenburg failed to recognize Payet’s tackling as … anything at all. Clattenburg is an experienced referee and an extremely competent one as well. For instance his handling the Portuguese defender’s Pepe ridiculous behaviour during the Champions League 2016 Finals is not only spot–on and professional, but also rather amusing.

His reaction to Payet’s tackling on Ronaldo in this Euro Cup 2016 final, however, is a major fail. The magnitude and recklessness of Payet’s action is without the doubt worthy of a yellow card, but to not recognize it as a faul at all, is not only, not worthy a referee of his rang, but also simply embarrassing. The fact that a football player had to asked to be taken out of the finals of Euro Cup is alone enough to mark Clattenburg’s decision (or the lack of) as humiliating mistake.

Immediately following the excident and in the days after, the socail media exploded with avalanche of ridiculing posts for the most part hanging on to the fact that Ronaldo cried when while he was carried out of the stadium.

I find demining commnets, posts and images idiotic in just about all contexts, but doing so about someone who is clearly hurting physically and emotionally is the very gist of malice.

And as for those tears, I think that we all can learn from the level of dedication and passion Christinao Ronaldo posseses. People like that – no matter their proffesion or status, are inspiration. They are willing to give it all for what they do: blood, sweat and tears … and of course the smile and shout “Vamos!” while lifting the Euro Cup 2016 trophee.

The second Clattenburg’s whistle marked the end of the game one thought run through my mind – poetic justice.
Thinking about it now … sure does make me smile.

Also looking at this video sure did make me smile inside and outside and it most certanly didn’t make the above mentioned four losers look any better.